The Diver-NETZ remote monitoring system is used in this project in Delft, The Netherlands 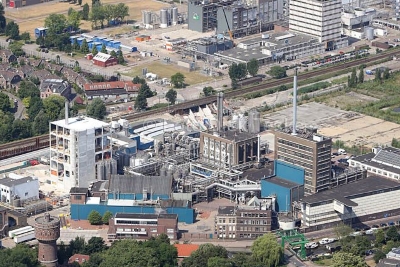 Exceeding data quality demands, insight into possible issues in the field and greater understanding of the groundwater system.

Shutting down an industrial groundwater abstraction which began 100 years ago

The historical city of Delft is well known throughout the world for its industry and its Delft pottery, also known as Delft Blue, which has been produced in Delft since the 16th century. In the late 19th century the Koninklijke Nederlandsche Gist- en Spiritusfabriek (Royal Dutch Yeast and Alcohol factory), now part of the multinational DSM, was established next to the historical center of Delft. This factory began increasingly using groundwater since 1916, mainly for cooling of the production process. Since 1996 DSM has been pumping up groundwater at a rate of 1,200 m3/hour creating a cone of depression with a radius of 7 kilometers. The groundwater extraction is located in a Pleistocene aquifer consisting of fluvio sands. The Pleistocene aquifer is topped by Holocene deposits consisting of subsequent layers of peat, sand and clay with a total thickness of 20 m.

In 2014 the Delfland Water Authority awarded Van Essen Instruments with a 5 year services project to automate a new monitoring network with Diver-NETZ wireless technology. Since the beginning of 2015, Van Essen Instruments equipped each well with the Diver groundwater datalogger which samples and stores groundwater levels and temperature every hour. A communication cable connected to each datalogger transfers the data to a Diver-DXT radio device affixed to the top of the well. These radio devices transmit data wirelessly to neighboring Diver-Gate(S) gateway devices, which automatically transfer the field data twice a day to a centralized database via the GPRS cellular network.

As the data is received, it is automatically validated and checked for various errors before it is made available to water authorities and stakeholders via the Diver-HUB web portal. Near real-time data collection allows Van Essen Instruments to quickly identify and mitigate hardware malfunctions and avoid data loss.

On a yearly basis, data from the pre-2014 existing monitoring network (86 wells) is delivered to Van Essen Instruments for a similar analysis. In 2018, Van Essen Instruments will also carry out a yearly time series analysis, in partnership with KWR Watercycle Research Institute, to quantify the effects of the planned groundwater abstraction reduction on levees and storm surge barriers.

Through the adoption of the Diver-NETZ system, the Delfland Water Authority has been able to meet the required 95% threshold of good quality data for the entire monitoring network and the required 70% threshold of good quality data for each monitoring well. Diver-HUB allows all stakeholders insight into current and past water levels, monitoring well conditions and monitoring equipment statuses. This increase in data will reveal finer details about the hydrological system and allow water officials to better manage and plan the envisioned reduction in groundwater abstraction in and around Delft.