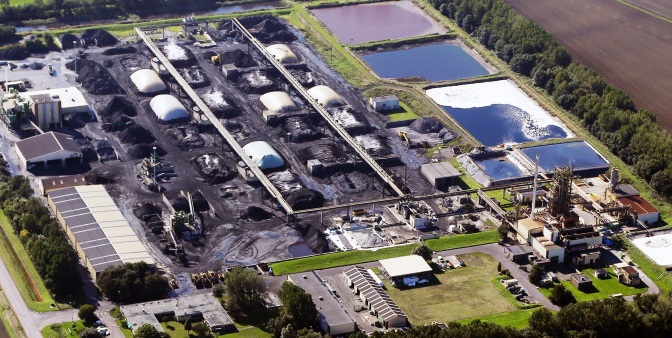 ESD-SIC manufactures silicon carbide (SiC) from raw materials; sand and petroleum coke. Sand and coke are mixed in correct proportions to create a reactive material. From this mix a material pile, a furnace, is built. In the center of this furnace is a core of graphite, which serves as an electric conductor. The furnace is covered with a plastic film to capture the gases that are formed during the production process. The gases are desulfurized and reused for energy production.

The graphite core is connected to a transformer and an electric voltage is applied. Due to the electric resistance, the core of the furnace reaches a temperature of about 2500 °C. At this temperature, the sand and coke decompose, and crystalline SiC is formed. This intense heating of the furnace requires large amounts of electricity and the process is very energy-intensive.

The importance of groundwater monitoring

Groundwater level and flow data is important to quantify and under¬stand the potential risks that groundwater might have on the production process. Groundwater may have an impact on production quality, energy consumption and process safety; for example, high groundwater levels can lead to steam formation under the furnace and cause steam to enter the furnace. This leads to deteriorated product quality, increased energy use and a safety risk due to increased gas production.

The TD-Divers sample and store groundwater levels and temperatures every hour. A DXT communication cable connected to each datalogger transfers data to a Diver-DXT radio device affixed on a 3 m pole placed next to the well.

These radio devices transmit data wirelessly to a nearby Diver-Gate(S) gateway device mounted on a lighting pole at a height of 25 m. A clear line-of-sight between the Diver-DXTs and the Diver-Gate(S) optimizes communication between devices and limits potentially negative effects on communication caused by the existing buildings and the furnaces on the site. The Diver-Gate(S) transfers the field data daily to an online database via the GPRS cellular network.

As data is received, it’s automatically converted to water levels and made available to the ESD-SIC employees via the Diver-HUB web portal. Near real-time data collection allows ESD-SIC to quickly identify and mitigate monitoring issues, improve data quality, and evaluate the perfor-mance of the overall production process.

Automating the groundwater monitoring network with the Diver-NETZ wireless monitoring system has resulted in efficiency gains, cost savings, improved data quality, and a better understanding of overall groundwater conditions around the ESD-SIC site. Safety has significantly increased as it is no longer necessary to visit the wells frequently to collect data manually. The information derived from the groundwater data has created a link between ground-water levels and process performance, allowing for appropriate measures to control groundwater levels.