The Diver-NETZ technology was used to get high frequency head measurements in stream. 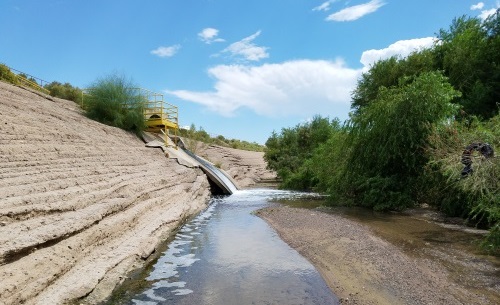 Obtain high frequency head measurements through a temporary installation in an ephemeral stream dominated by effluent discharge and monsoon flows, and gain insight into recharge rates.

Effective monitoring of surface water levels in a river with highly variable flow conditions through the use of Divers.

The Lower Santa Cruz River runs through the cities of Tucson and Marana in Southern Arizona. Historically, the river supported communities and agricultural needs, but drought conditions and a lowered water table due to excessive groundwater pumping caused perennial flows to cease. The ephemeral stream now experiences flow only during intense monsoon rains. In Tucson, re-directing effluent flows from the county wastewater treatment plant to the channel has restored some stretches of the river. The effluent flow has brought back a riparian habitat to the area and contributes to the city’s managed recharge project to store and recover reclaimed water in the local aquifer. Water that infiltrates in the river before leaving town boundaries earns recharge credits, which can be withdrawn from the reclaim system at a later time. This helps meet peak outdoor water demand and curb the use of potable supplies in the summertime. In 2014, a new wastewater treatment plant -Agua Nueva- drastically improved water quality of effluent resulting in much higher in-stream infiltration rates. A reassessment of the infiltration rate of this cleaner water will verify what the recharge credits should now be.

This data on infiltration rate is also of wider interest to a community invested in the health of the Santa Cruz River. Current proposals aim to restore perennial flow to stretches of the river running through downtown Tucson by Diverting effluent. Understanding how this effluent will infiltrate in-stream is necessary for properly determining the water demand and long-term sustainability of various projects.

Measuring the infiltration rate of effluent in stream

Divers monitoring surface water levels at high frequency time intervals simulate a falling head permeameter test and provide an infiltration rate. This rate can be applied to a given length of channel to calculate recharge.

Drive points were installed at four transects along the river, starting close to the discharge point at Agua Nueva and continuing for a one mile stretch downstream. The three-foot drive points were pushed into the sandy streambed and topped with a four foot PVC extension. The Diver was suspended within the setup and attached to a Diver-DXT radio device which allowed for wireless downloads of the data using the Diver-Gate device and for each installation to have its own barometric correction.

Divers provided an effective method for surface water monitoring in a river experiencing highly variable flow conditions. Divers suspended in a low cost temporary drive point installation were able to gather high frequency data and capture changes in the river stage due to varying levels of discharge from the treatment plant. The resolution of the measurements allowed a travel time to be determined from each section to the one immediately downstream. This was done by lagging the water level data from the upstream section to match the peaks of the downstream section. The determined travel time was used to appropriately lag stream flow measurements and improve the accuracy of the mass balance approach to study recharge. The installation was able to withstand the intense monsoon storms, which increased the discharge in the river by orders of magnitude and greatly disturbed and transported riverbed sediment. The setup could be easily relocated after these events if changes in the channel geometry and sediment buildup upstream required a new monitoring location. Using the Diver-DXT radio device allowed for downloading of the data without having to enter the river, which is not always easily accessible. Data from Van Essen’s Divers have provided better understanding of the behavior of the effluent instream and will allow for proper estimation of recharge credits and planning of future effluent use.

This study is still in progress and has been extended into the winter of 2016/17. It is clear that the Diver with Diver-DXT is easy to use and is very suited to this type of rapid and short term deployment to gather head data from streams The ability to set a drive point into a stream bed in a matter of minutes makes this type of deployment a valuable tool in studying stream beds. Extraction is also as fast. The ability to collect data from a distance and not reenter the stream bed also is a unique aspect of the Diver-DXT deployment