The hydrological status of the mangrove forest Het Spaans Lagoen (Aruba) was evaluated during a three-month field study. 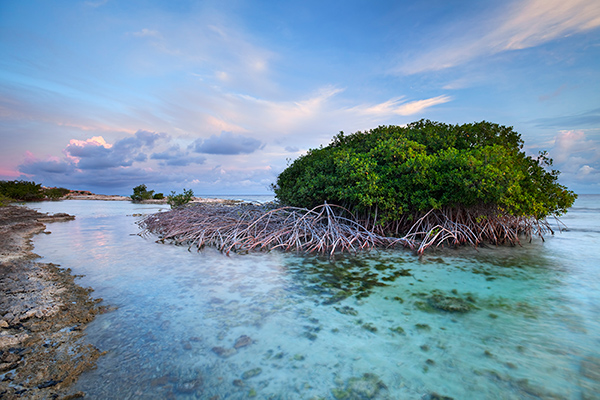 Evaluate the hydrological status of the mangrove forest Het Spaans Lagoen (Aruba)* during a three-month field study. Examine whether the positive effects of the mangrove forest, such as habitat and coastal protection are being threatened. Quantification of salt and freshwater supply and estimation of forest biomass.

Divers were deployed in the study area to measure tidal effects. A model was developed to simulate tree growth and estimate biomass under the current hydrological regime and validated against the Diver measurements.

The current hydrological conditions are favorable for mangrove growth in Het Spaans Lagoen. The biomass of the forest was estimated and compares well to similar mangrove forest. The model results indicate that mangrove growth is not limited along the canal nor in the hinterland. .

Mangroves are woody plants that grow in tropical and subtropical climates at the transition from land to sea. Being exposed to tidal flooding, mangroves must cope with varying salt concentrations. Different mechanisms, including salt-excreting leaves and ultra-filtration at the root cell membranes, enable water uptake by mangrove trees under saline conditions. The extent to which mangroves survive saline conditions differs per mangrove species.

Globally, the total area covered by mangroves declined considerably over the past decades: 1% to 2% per year. The main causes for decline are urbanization, aquaculture, mining, overexploitation and fishing. Conservation of these ecosystems is necessary for maintaining biodiversity and protection against flooding and erosion.


Conservation area Het Spaans Lagoen on Aruba is a 70-ha narrow coastal inlet, fringed by tidal mudflats and mangrove swamps and part of the Ramsar Convention (site no. 198). Very little research has been done on this Ramsar site with respect to mangrove growth and quality, although the quality of the mangrove forest Het Spaans Lagoen should meet the guidelines defined by the Ramsar Convention. In this exploratory research the status of the mangrove forest was analyzed and evaluated.

Valuable information of the status of the mangrove forest can be obtained by quantifying the different terms of the water balance. Growth and composition of mangrove forests are affected by evaporation, freshwater supply and the water quantity and quality.

Hydrology in mangrove ecosystems is complex and dependent upon a wide variety of factors. In mangrove ecosystems salt water enters the system and mixes with freshwater predominately due to tides. The salinity in such an environment is, however, not solely regulated by tides, but also channels and the associated hydraulics play an important role. Blocking of channels because of growth can lead to changes in the salt balance of the total system.

The seawater inflow in this study was derived from the Diver datalogger data. The Cera-Diver® was used to measure water levels, because it is resistant to the corro-sive effects of brackish water and seawater. Five Cera-Divers were installed in a transect to measure the effect of tides at multiple locations in Het Spaans Lagoen. Four Cera-Divers were deployed in the canal and one in the hinterland. The distance between the monitoring points was 400 to 600 m. The Divers were programmed to take a measurement every 15 minutes.

Since the Cera-Divers also measured minor fluctuations caused by waves a smoothing algorithm was applied to remove unwanted water level variations that could result in an overestimation of the influx. The daily seawater influx was derived by subtracting the water level during low tide from the water level during high tide. In case multiple tidal currents occurred on one day, these values were added.

The figure below shows the results of the tide measurements. Divers 1 to 4, installed in the canal before the mangrove forest, exhibit the same pattern. The water levels in the canal fluctuate 20 to 30 cm depending on the tide. Diver 5, installed in the hinterland, shows a more irregular pattern, with fluctuations of approx. 5 cm. This indicates a decreased influence of tides in the hinterland.

For the modeling of mangrove biomass, tides were modeled for the simulation period. A simple validation was performed between the measured tides and the modeled tides during the study period to get an impression of the model performance. The validation results are shown below and show a good match between modeled and measured tides.

The current hydrological conditions in Het Spaans Lagoen are favorable for mangrove growth, both in the forest and the canal. The effect of tides in the hinterland is considerably reduced compared to the effect observed near the inlet; the seawater inflow in the hinterland is approximately 10% of the inflow near the inlet. The current inflow is still sufficient to prevent both water and salinity stress on the mangroves.

The average above-ground biomass measured in Het Spaans Lagoen is comparable to averages measured in other forests at approximately the same latitude.

The results of the model developed in this study indicate that a large reduction (> 50%) of the seawater inflow is the greatest threat for the mangrove forest in Het Spaans Lagoen. A reduced inflow would increase the salt concentration in the hinterland and could potentially result in mangrove mortality. Therefore, maintenance is necessary to keep the hinterland connected with the canal such that the seawater inflow is sufficient to counter salinization of the hinterland. However, it can be concluded that under the current hydrological conditions the habitat function of Het Spaans Lagoen is not in danger.

The contribution of other water resources is important, but not crucial for tree growth. Groundwater flow and surface runoff are only temporary resources varying seasonally and annually, whereas mangroves need a constant water supply.

*The text, graphs and data used for this case study are based and/or copied from Siebe Houtsma’s MSc thesis titled “The current status of mangrove forests in Spanish Lagoon (Aruba) evaluated from a hydrological point of view”, July 2017, Soil Physics and Land Management, Wageningen University and Research www.dcbd.nl/document/current-status-mangrove-forests-spanish-lagoon-aruba-evaluated-hydrological-point-view